Where Are 2020 Candidates’ Plans to Fix Problem?

“Iowa has the worst bridges in America,” said Lori D’Orazio, National Political Director at ReBuild USA. “As a consequence, the ‘most structurally deficient bridges in the United States’ pose daily safety and transportation risks to Iowans and the 2020 Presidential candidates, campaign staff, and reporters traveling across the state. Over the next six weeks, ReBuild USA will be raising awareness about this problem to find out from the candidates what’s their plan to fix it.” 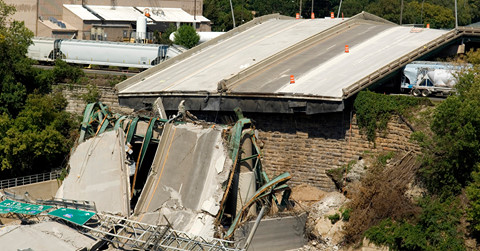 “As we await the State of the Union this evening, ReBuild USA and its 400,000 activists are hopeful that leaders in Washington, DC will finally take action with a true bipartisan effort to fix our nation’s crumbling infrastructure,” says Lori D’Orazio, National Political Director of ReBuild USA. “Americans are in danger because of crumbling roads, deficient bridges, failing water and energy systems, dilapidated schools and airports that need structural modernization, and an out-of-date electrical grid. We urge all our elected leaders in Washington to support a plan that is broad, robust, sustainable, efficient, and includes safety standards for our workers and make infrastructure a real priority this year — before it is too late.”

Fix our crumbling infrastructure — Before it’s too late full post

Washington, DC – Tomorrow is Election Day. For years we have heard promises from Democrats and Republicans alike to fix America’s crumbling infrastructure. Yet, no action. Now we have a chance to hold these politicians accountable and vote for those who pledge to rebuild America.

Just last week, testing revealed that more of America’s cities and towns are facing high, unsafe levels of lead in our water systems, putting our children and families in danger. What’s next? It’s no question: our communities need leaders who will rebuild our communities, and invest in US.

Across the country, candidates for United States Senate and House of Representatives are signing ReBuild USA’s Infrastructure Pledge, which affirms: “If elected to Congress in 2018, I pledge to support a $1 trillion federal infrastructure package that is broad in scope, robust in funding, sustainable for future generations, efficient in design, and that has worker standards to ensure we rebuild America and empower communities across the country.”

According to results of a recent poll, 78 percent of voters nationwide agree that America’s infrastructure is in poor condition and in need of repair. The poll results also show that 75 percent of voters are concerned by news reports that hostile foreign governments have hacked into the systems that control U.S. electric power.

Today, ReBuild USA — a national nonpartisan organization — launches a major digital advertising campaign in six key states to call on Congress to rebuild America and the middle class by rebuilding our infrastructure. The six-figure digital campaign targets voters in Illinois, Indiana, Michigan, Ohio, Pennsylvania, and Wisconsin and encourages them to contact their Members of Congress and tell them to act on infrastructure.